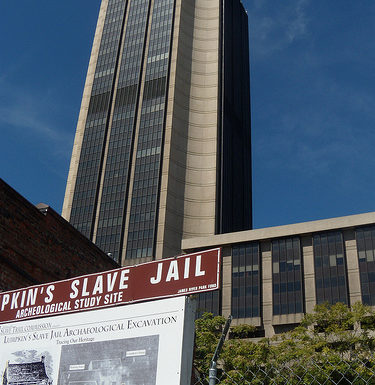 I visited Lumpkin’s Slave Jail a year ago with 30 new friends and heard Ben Campbell retell stories of the jail. This site brings a range of emotions when you hear Ben tell the story (read Ben’s take on Richmond history) and begin to recognize the dark days of Richmond’s history in the international slave trade.

Lumpkin’s Jail was located on a half an acre of land in what is now Richmond’s historic Shockoe Bottom. The jail was known as “The Devil’s Half Acre” because it was a holding pen, punishment and “breaking” center for more than 300,000 enslaved persons from the 1830’s until 1865, when Union troops took the city. Owned by slave dealer Robert Lumpkin, the jail was the largest antebellum slave trading site outside of New Orleans.

In Richmond’s on-going saga of when and where to build a baseball stadium, the site of Lumpkin’s jail has been a point of controversy.

There is no doubt: Richmonders have already covered up the jail once (with Interstate 95); we do not need to make the same mistake twice.

A reviewer on Yelp said, “You would think, with all the implications of a place like this, that there would be more.” With a baseball stadium in the Bottom, there can be.

And that’s a good thing.