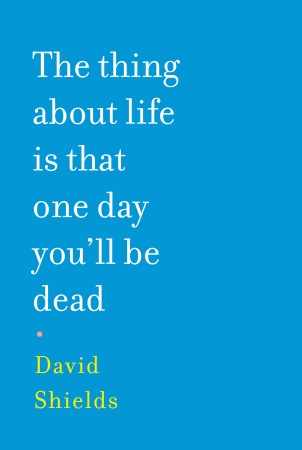 My friend’s dad passed away Monday night. He lived a great life of fifty-six years, and died having spent special time with his family by his side. In death, life seems more precious. More precious for me. More precious as we reflect on his life lived. Precious life.

Milt Shields has passed his ninety-seventh birthday with barely a hiccup. His physical health is impeccable; he played tennis and golf until his mid-nineties, and still swims a few laps a day in the neighborhood pool. He says he has seen a doctor more from 94 to 97 than he did in his first 94 years, yet only a colonoscopy has kept him back in recent days. His son, David, however, is not so healthy: he boasts an aching back, a receding hairline, a reconstructed leg and, most importantly, a birthday past fifty. He views his own physical problems as an indicator of his aging as he reflects on birth, life and death in his memoir The Thing About Life Is That One Day You’ll Be Dead.

Shields follows the four stages of life: infancy and childhood; adolescence; adulthood; and old age and death. In each stage, he weaves the biology of that life-stages, stories from literature and history, the well-matured life experience of his father and the days of his own fifty-one years.

In the first half of the book, Shields writes as though the glass is half-full. These young years bring life, hope and vitality, and Shields writes with a sense of longing for those years. In his own adolescence, his star athletic abilities were snatched from his life by an untimely injury. Hope is gone. When he begins writing on adulthood, the glass becomes half-empty. Life is no longer a wonderful gift, rather a curse that ends in death.

Shields views the purpose of life as reproduction. After children are born, life is lived on a downhill slope, speeding rapidly toward impending death. Shields writes as an atheist (raised in the Jewish faith), so his perspective (fear) of death can be understood in that light.

The biological implications of aging, along with Shields’ apprehension at moving toward death, yield the dark side to his writing. The scientific exploration follows his writing in verifying the decline of the human body after adolescence and early adulthood. Yet the evidence provides a fascinating glimpse into the complexity of human life and the changes we have seen in humanity from generation to generation. Did you know:

“A major new study of body weight and health risks by the Centers for Disease Control and Prevention and the National Cancer Institute concluded that the very thing (a person with a body mass index below 18.5 — for instance, a man who is 6’ and weighs 136 pounds or a woman who is 5’6” and weighs 114) run the same risk of early death as the very fat.”

“Your IQ is highest between ages 18 and 25. Once your brain peaks in size — at age 25 — it starts shrinking, losing weight, and filling with fluid.”

From generation to generation, life changes and is increasingly complex. “In 1900, 75 percent of people in the United States died before they reached age 65; now, 70 percent of people die after age 65.” Medicine, diet and technology in the last century have lengthened our lives. Yet the proverbial “fountain of youth” has not yet been found.

Shields’ stories will draw you in. One biology fact will make you want to change your life habits one way. The next will push you the other. The wit and humor from lives gone by will make you laugh and think, and long for a vibrant life.

The thing about life is that one day you will be dead. How will you live yours?

Disclaimer: This book’s MPAA rating would be PG13. Shields is deeply honest and open — not dirty, just brutally honest — regarding human biology and sexuality.