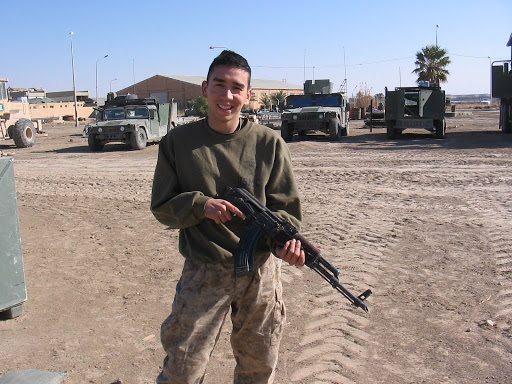 The skies were clear and a full moon shown down on Company C of the 4th Combat Engineer Battalion as the Lynchburg-based unit drove, lights off, toward a tiny village in western Iraq.

Heavy sand created a red haze; the chilly air smelled of mud from recent rain. It was just after 3 a.m. when the Marine reservists arrived at the town.

The troops were on a mission to capture insurgents believed to be in a building in Hoklinea, said Jim Dolan, a reporter with WABC-TV in New York who is embedded with the unit.

“The Marines pulled up to the building, searched it and it was empty. So they got back in their vehicles in the convoy” to leave, Dolan said by telephone yesterday from Haditha, Iraq.

That’s when shots rang out.

The four men who were killed were riding a highback, a form of a Humvee with a flatbed. Its sides are 3 feet high and armor-plated.

At first, it was just a few shots, Dolan said. “Then a barrage of shots [came] from what sounded like machine guns and rocket-propelled grenades. [The Marines] were returning fire, and it escalated. For several minutes, there was a fierce and deafening firefight.”

The shots seemed to come from at least two or three locations, one of which was a mosque, Dolan said.

One of the grenades hit the highback and killed two of the four men instantly. The other two died on their way to get medical attention, Dolan said.

Four others from the Lynchburg-based unit, including a man from Lynchburg and one from Bedford, were injured in the attack. Lance Cpl. Mark W. Miller, 20, of Bedford received gunshot wounds, while Cpl. Timothy Franklin, 24, of Lynchburg, received minor shrapnel injuries, said Capt. Jamie Wagner, an inspector-instructor with the unit.

Troops set up a traditional memorial for each: the Marine’s M-16 rifle, bayonet down and stuck in the dirt, with his helmet and dog tags on the butt of the gun and his boots in front, Dolan said. Marines from Company C walked up to each of the four memorials, knelt, touched the boots, and observed a moment of silence. Then the rest of the battalion walked by the memorials and gave a single crisp salute.

Dolan said several men spoke during the service about how the men would be missed, how honored they felt to have known them and how they would honor the Marines’ memory by carrying on their mission.

Dolan, 46, and a photographer have been embedded with the company since Jan. 17.

The Lynchburg News-Advance has removed the archive of this article from its website. In order to allow people to hear Karl’s story, I am reprinting the article in its entirety here.