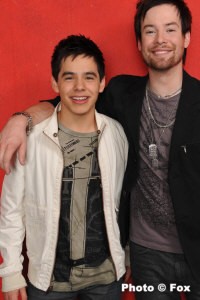 Watching David Archuleta sing on American Idol is one of those experiences that brings hope. For middle schoolers and the middle-aged, Archuleta can’t help but stand tall as an inspiration. Every week, the screams and cheers of teenaged girls across the audience let loose in support of the 17-year-old pop phenom.

Two weeks ago, after Archuleta swooned audiences with “Stand By Me” and “Love Me Tender,” AI judge Simon Cowell called the first number “the best so far tonight” and said Archuleta “crushed the competition” with the second. Archuleta’s teenaged admirers felt the same way, hitting the polls to vote for their favorite idol.

In last week’s semifinals, Archuleta belted out “And So It Goes,” “With You,” and “Longer.” After the first performance, AI judge Randy Jackson told Archuleta, “You’re in it to win it, Baby!” Cowell’s analysis after the night’s finale: “I think you’ve done enough to get into the finals next week.”

Before last week’s semifinals, Archuleta and his three running-mates visited their hometowns. All three were brought to tears by the overwhelming outpouring of support from their local fans. Throughout Murray, Utah, the faces of adoring teenage fans (mostly girls) littered the crowd. David Archuleta is undoubtedly their American Idol.

Teenagers tend to get a bad rap. Apparently they 2,000 years ago, too. Paul writes in his First Letter to Timothy that Timothy should not let anyone belittle him based on his youth. (It is debatable how old Timothy was at the time, but whether he was 17 or 37, a person of 17 would still get a hard time.)

Miley Cyrus’ provocative photographs do not help this reputation. Nor do Lindsey Lohan’s repeated arrests, drunken driving charges, eating disorder, or rehab center visits. And Britney Spears led them all with her lengthy fall from grace.

Cyrus has apologized for her photoshoots, and asked her fans to “understand that along the way I am going to make mistakes and I am not perfect.”

Archuleta is certainly not immune from problems, either. His “helicopter parent” father was banned from the stage before last week’s competition. His ouster raised questions about his input into David’s performances, but did little to minimize David’s popularity. In the audience for last week’s competition, Mr. Archuleta cheered for his son on David’s way to the finals. Archuleta’s rise to AI’s final show helps today’s youth, the ones that idolize young David, realize that their voice is being heard. Just last week, 54 million votes were cast for the three remaining Idols (even if Howard Stern doesn’t believe your votes count).

In 2004, 121.5 million votes were cast for President. So American Idol produces nearly half as many votes as the American election for President? With those kind of numbers, the influence of AI is not to be diminished. Is the show influencing young adults to have their voice heard?

Rock the Vote says that the young adult vote is growing. In a February 2008 report, this non-partisan group encouraging the youth vote quoted a Time Magazine survey that found 74% of young adults 18-29 are paying attention to the 2008 presidential campaign. In 2004, only 42% paid the election any mind.

What is driving these voters to the polls? As far as issues go, the same Rock the Vote report cites the economy as the top concern for 42% of young voters. Education and the war in Iraq are second at 12% each.

According to the Center for American Progress, not only is the economy the most important issue for young adults in the 2008 elections, it is a bigger concern for this generation than the same demographic in previous elections.

CAP also found that Millenials, today’s young adult generation, are more likely to support universal healthcare and increased government spending on healthcare and education, even if it means increased taxation. This generation is “more likely to express interest in politics and elections, care a good deal who wins, try to influence others’ votes, and attend political meetings.” And Millenials “are not bashful about expressing their voice and are quite active in the civic realms of group membership and volunteering.”

With the evolution of the Internet, the introduction of Web 2.0, and the increased participation in social networking and online voting, it is no wonder that this generation has found its niche in politics as well.

Not everyone is behind this “fan vote,” though. For the first time ever, the Academy of Country Music left its Artist of the Year Award up to fan voting via the CBS website for Sunday night’s awards show. After winning the award, Kenny Chesney said web voting turned the award “into a sweepstakes to see who can push people’s buttons the hardest on the Internet.”

Maybe it won’t make everyone happy, but no doubt the voting experience was an exhilarating one for Kenny’s fans. When you know you had a voice in the entertainment industry, there could be carryover into your voice in politics. Even voters who sided with the runners-up probably enjoyed the experience.

Political involvement has been on the rise for the past decade, but are the issues dealt with today really so important as to draw young voters off their laptops and into polling places? The economy has fallen on hard times of late, and the Iraq war has dragged on for another four years. Is that all that calls these young voters to action?

Ron Paul entered the Republican campaign with an ambitious goal of being “anti-Washingtonian” in his political endeavors. His new book, The Revolution: A Manifesto (reviewed at HJ), lays out his plans for a new economy, a new political worldview, and a new America. In short, he gives his supporters hope in change for tomorrow.

Barack Obama has also put in his two cents for change. Based on the polls available, it would seem that Obama himself is responsible for at least a portion of this increase in the Millenial’s vote, too. When Hillary Clinton bested Obama by 2% in the Indiana primary’s general vote (51-49%), the Washington Post’s exit polls show young adults voted for Obama over Clinton at an overwhelming margin (62-38%).

What about Obama is so enticing? J. Alan Sharrer reviewed Obama’s Audacity of Hope for HJ and said, “The hope [Obama] harbors for the American people is such that it becomes faith that the US can be a better place—both for us and future generations. With the Golden Rule as a guide and ‘How would that make you feel?’ as a key question to ask, Obama is definitely on the right track.”

With the momentum of David Archuleta encouraging the next wave of young adults, and candidates like Ron Paul and Barack Obama offering up change for tomorrow, there is no doubt that America has reached the dawn of a new day. Hope for change is here.

Will these political candidates achieve change in Washington? Only time will tell. Time may disenchant these new Millenial voters, or propel them into the path laid out by Paul and Obama.