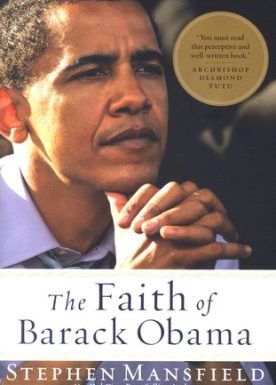 A Candidate’s Faith: What are we to take from it? When I heard that a respected Christian publishing house was releasing a book on the faith of a presidential candidate from the pen of a New York Times best-selling author, I figured it would be worth a look.

Faith is so integrally intermingled with this political season that it is necessary to understand the implications, hear the stories, and know the players. Stephen Mansfield begins The Faith of Barack Obama with this introduction:

“This book is . . . written in the belief that if a man’s faith is sincere, it is the most important thing about him, and that it is impossible to understand who he is and how he will lead without first understanding the religious vision that informs his life.”

The Muslim faith of Barack Obama’s father came from his upbringing in Kenya, a belief he rejected as a student at the University of Hawaii. It was there that the elder Obama began a relationship with the senator’s mother. Senator Obama’s mother did not believe in any religion. That religious indifference was the environment the Senator learned in as a child–the environment that helps him comprehend the religious pluralism of today’s America.

Senator Obama’s personal faith views find a foundation in his secular childhood household, but more recently it has been formed in the church of his adulthood. Is his faith perfect? Is anyone’s? What we need to remember is that we will not place our votes for McCain or Obama as our national pastor or spiritual guide, but as our President. Mansfield tries to communicate the truths and eccentricities of Obama’s background and the need for America to base its understanding not on lies, but on the legitimate background and history of the diverse people who now consider themselves Americans.

The Faith of Barack Obama tells the story beyond Obama himself, recognizing that Rev. Jeremiah Wright and the Trinity United Church of Christ in south Chicago influenced Obama’s early days of faith. The theology of social action present in at Trinity helped Obama in the early days of his presidential campaign to align with young voters who have the same passions.

Mansfield also looks into the faith of John McCain, Hillary Clinton, and George W. Bush, knowing that each is part of the 2008 political process (as he wrote the book, Senator Clinton was still involved). Bush’s campaigns and his tenure as President have significantly affected the intersection of American religion and politics. But the landscape has changed. The elder voices of the Religious Right have passed away (Jerry Falwell), condemned Venezuelan President Hugo Chavez and the Israeli President (Pat Robertson), and committed moral failures in their church setting (Ted Haggard).

On the heels of those changes, supporters of the Religious Right were split between the menu of potential president candidates: Rudy Giuliani, former Baptist minister Mike Huckabee, Mormon Mitt Romney, Fred Thompson, and John McCain. At the same time, Senator Obama refused to ignore his faith from the podium, which piqued the interest of many engaged Christian Democrat–as well as young voters unaligned with any one party. The Senator is also willing to voice doubts that even America’s preachers are often not willing to voice, but are certainly present.

It is a sad commentary on today’s American culture that Mansfield must include as thorough an examination into Wright and the Trinity Church of Christ, simply because the black church and white church are so vastly different. The differences are misunderstood, and Mansfield handles this well by carefully describing the development and current environment of black theology. In understanding Obama himself, it is necessary to recognize the truths regarding the theology in which he came to faith in Christ. Mansfield also paints a clear picture of Obama’s childhood and the multifaith, multinational upbringing through which he was formed and nurtured.

Stephen Mansfield is a renowned writer and author of books on people of faith. With that resume, I expected something deeper. Mansfield’s book digs through the archives of the last few years, telling stories already told by CNN, the Chicago Tribune, the New York Times, Obama himself, and countless others; there are no first-hand accounts. Readers should also not expect a story entirely of Obama, as Mansfield spends a significant portion of this work telling the story of others. This is necessary and good, but surprising nonetheless.

“Whether or not he wins his party’s nomination and the presidency, Obama is meaningful to our time for what he represents that is therefore placed under the national spotlight: The challenges of the biracial person. The cause of the poor. The rise of a new generation. The restoration of religion to the political Left. The manner, power, and moral case of the black church in America.”