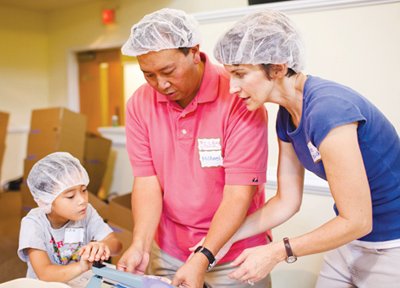 This article originally appeared in the Religious Herald and was syndicated by the Associated Baptist Press for national distribution.

RICHMOND, Va. — On an overcast Sunday morning in Richmond, 500 volunteers gathered at Gayton Baptist Church in the city’s western suburbs to make a difference a half a world away, preparing healthy meals to feed 277 malnourished children a meal a day for an entire year.

Through a partnership with Minneapolis-based Feed My Starving Children (FMSC), Gayton set aside its regular worship service schedule for one day and used the time and space, along with volunteers from throughout the community, to prepare 100,000 meals through FMSC’s MobilePack program.

People from the community joined church members at eight stations in the sanctuary to scoop ingredients, fill bags and seal them.
“Our mission is to meet the spiritual, physical and emotional needs of people,” said senior pastor Phillip Faig, “not only in Richmond, but around the world. And we’re just really thrilled to partner with an organization like Feed My Starving Children.”

During the first shift, volunteer Angela Hubbard met a gentleman who happened to visit Gayton that morning.

“He commented on how he just walked into this church today without any idea that he would be feeding thousands of children,” Hubbard recalled.

Gayton Baptist member Lori Knitter brought the idea of the packing event to Faig in early 2011, and with the support of countless volunteers and a volunteer leadership team, the church raised more than $24,000 to purchase the ingredients.

Volunteers spent two hours working around eight packing stations, measuring ingredients of rice, soy, vegetables and chicken, packaging the food and preparing boxes for shipment to feeding programs around the world.
Feed My Starving Children, a Christian non-profit hunger relief organization, was founded in 1987 to help starving kids, and their latest food mixture was developed by scientists to ensure starving kids could return to good health.

Last year, volunteers joined FMSC to package 124 million meals, supporting partner feeding programs in 67 countries around the world. FMSC is preparing to send meals to East Africa in response to the extreme drought and famine in that region.

“One of the things we like to say around here is we want to share a good word and do a good deed,” Faig said. “Jesus met human needs, and we seek to do the same thing.”

Aaron Lee is associate pastor of youth and missions at Gayton Baptist Church.